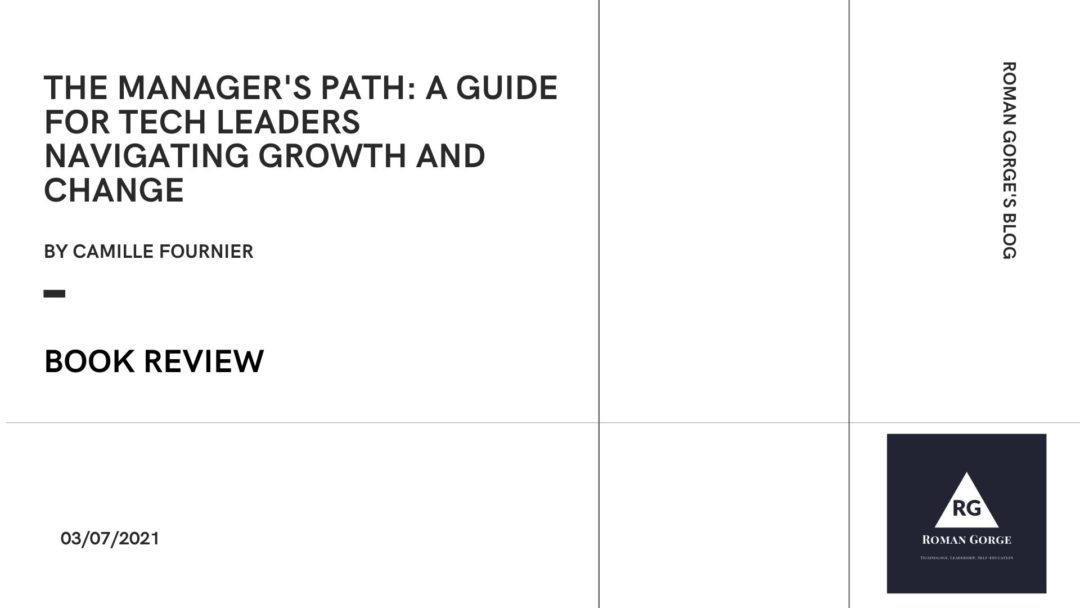 There are 27 million Software Developers world wide according recent estimations. If we will take average span of control as 10, we will get roughly 2,5 million Engineering Managers. That is an impressive number. But who are those people?

While it is clear what a Software Developer should do well (write good quality code), it is not that straightforward what set of skills an Engineering Manager should have. Or how career path from a Developer to a Manager may look like in tech companies today. Of course, every mid- or large size organization has a blueprint that describe career ladder and number of job descriptions for Engineering organization. But it does not help a lot in practice.

The book outlines a path from Software Developer to a VP of Engineering/CTO in today’s IT world. It describes all intermediate states – Technical Lead, Engineering Manager, Manager of managers and etc in a very structured way. It starts from very basic fundamental knowledge and takes a reader to more complicated topics, like organizational culture, stakeholders management and etc.

If you are a manager today, this book most probably will not give you a lot of insights. But if you are in the beginning of your career and looking for a management position, it will be definitely useful. The book indeed gives a path that is almost the same in every enterprise that has an Engineering organization.

The author spends a lot of time explaining technical leads/senior engineer role in a team. IMHO, this role is underestimated in a lot of companies and the book has ready to implement guidelines.

Overall score – 4 out of 5. I can recommend this book to folks in the beginning of a career in Engineering organizations or Senior Engineers who would like to make a step to a management role.

Write in comments – how a good manager should look like?

Check out my other book reviews.

Beginning of 1922. The Russian Civil War is almost over. Soviet government established on the major part of territory which is soon become known as USSR. The last piece of “old Russia” is Far East with a center in Vladivostok. But its time is running out as well.

Red Army defeated its rival White Army. Ex-officers, ex-soldiers and everybody else who are not welcomed in Soviet Russia are evacuating to all possible directions. Very soon Istanbul, Paris, Berlin and Harbin will become centers of Russian immigration. One of them is my grand-grand-father. He will settle in Manchuria and, like many other his combatants, will train Chinese troops to confront Japanese invasion that will happen in 15 years.

This non-fiction book is about one of many ex-generals Pepelyaev who fought and lost in Civil war. He immigrated to China. After hearing news about anti-communist uprising in Yakutia, he decides to organize last “crusade” against Soviets. He and almost 1000 volunteers will sail to Okhotsk and spend 1 year in deep Yakutian forests. They will fight for their Russia.

On the other side of barricades is commanding officer Strod. He is also fighting for Russia. Just his comrades ideas about world order could not co-exist with ideas of Pepelyaev’s volunteers brigade.

Both sides will suffer from hunger and extreme Yakutia weather conditions. Both sides will kill each other against the background of extraterrestrial Siberia winter nature. People will walk 30 km per day without roads and with -50 degrees outside. People will be on the edge of human body capabilities.

The book is not selecting sides. Instead it is trying to answer what made these people to be so committed to their ideas? What motivated 1000 people to take this suicide journey? How these two antipodes, Pepelyaev and Strod, will communicate with each other?

The book is based on diaries of participants and court records against Pepelyaev and others. It is very well written, I would say one of the best non-fiction books that I ever read. If you speak Russian and like history, I highly recommend it.

What is your favorite non-fiction book? Write a comment with your answer!